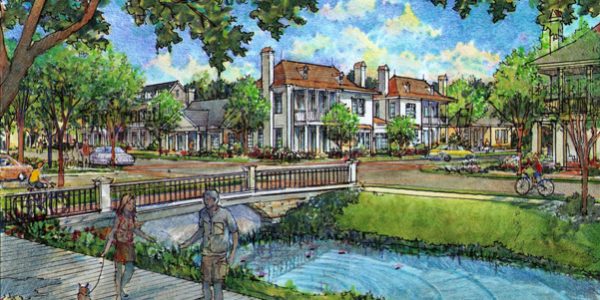 The much anticipated Long Farm Village development is under way off Barringer Foreman Road with a big model home staged and ready for visitors. Long Farm Village, which is being built on property owned by U.S. Sen. Russell Long’s family, will be a traditional neighborhood development that begins with 65 upscale homes in Phase I.

A Rouses Supermarket off Airline Highway will anchor light commercial activity in the development, which will eventually occupy more than 500 acres off Barringer Foreman Road between Jefferson Highway and Airline.

“We’re excited about this development,” said David Landry, city manager for Long Farm Village builder D.R. Horton, a national company based in Ft. Worth. The company has been building in the Baton Rouge area for years, and Long Farm will be the most upscale local development – by far—undertaken by D.R. Horton, Landry said.

The entrance to the upscale four-street development has a long lake along Barringer Foreman Road. Walking trails and lots of green spaces are planned, according to Landry and Long Farm Village sales counselor Darcy Theobold. Long Farm Village will represent a new urbanism that will “have the charm of an old American city in a new development,” Landry said.

The developer has been “very particular about making sure the streetscape is diverse,” Landry said. There will be no “cookie cutter” feeling in Long Farm Village, rather it will be like a custom development, he said. Architects in the subdivision include Kevin Royston, Dwayne Carruth and CSRS Architects, Landry said. Christina Graci selected the interior and exterior colors, he added.

The “Royal B” model home was recently completed, and it’s about as custom as you can get. The Royal B, located at 15511 Long Farm Road, is not for sale, but it is also being built elsewhere in the development, Landry said. Amenities include heart pine floors, 3cm granite or marble slabs in the kitchen, tall baseboards, crown molding, custom cabinetry, travertine tile, stainless GE appliances, old bricks, wraparound porches and verandas, 8-foot interior doors and 30-year roofs with Tech shield and slate ridge caps, Theobold said. All homes will rise from post-tension slabs, she added.

The Royal B kitchen features beveled-edge Calcutta marble slabs and a neat motion-activated faucet by Moen.

The marble master bath has a very cool shower setup. It’s called a Moen IO digital spa, and it has electronic controls to regulate water that blasts from five different sources, including a rain-head and a hand-held unit. The master bedroom and a guest bedroom (or office) and two baths are on the first floor, and two bedrooms with baths are on the second floor. Wide wraparound porches with beaded board ceilings are on both floors.

Besides the lakes and walking trails, Long Farm Village will have a clubhouse and pool, Landry said. Both are already nearly complete, meaning the first residents in Phase I won’t have to wait for months to enjoy them.